Okay. So here is the scoop on that reporter fellow…Literally.

I walked into my favorite coffee shop, because, you know coffee, and the man came up to me chatting like I knew him.

After the whole shoe business…Well, you can say I became a local legend. Ahem.

I knew he was after something. I could feel it in my bones. I gave him my best glare, said nothing, and found a table to wait until that line died down to place my order. It wasn’t a long wait.

Wanting to get to work and needing coffee to spur me on, I got in the short line. Then it happened. Again. I felt a tap on my shoulder.

“Are you that publisher lady who was in the papers? I thought you lived around here. What are the books you are publishing about?”

The hair on the back of my neck raised. A reporter. I recognized him in an instant. I said something like, “They are mysteries. Our latest is about a murder…A giant murder in fact. It tells the true story of Jack and the Beanstalk. No magic beans and silly nonsense. You can find more about it on the board by the door.”

I ordered my coffee and went back to my table, pulled out my computer, and got to work.

“Excuse me” I sighed and looked up. I was in the middle of reading an exciting email about sleuths in an Ever After Series.

“I am so sorry to bother you but it appears to be quite crowded in here. May I share your table?”

Feeling a bit bad, I offered her a seat. In a few minutes, she began chatting and the feeling bad business disappeared quickly. She seemed a nice girl. Young, with her hair pulled back and big rimmed glasses framed her eyes but I had work to do. I shut the lid to my computer, tried to smile, and join the conversation. Until the conversation took a suspicious change.

“Have you heard any good news lately?”

“No. I have been on a trip so away from the news” I reached into my backpack to search for my phone and opened up Google.

“Not even about the big party and that man Taggert who was murdered?”

“Are you looking up information about it? I heard the police are being very tight-lipped. Why I even heard people couldn’t leave the party without…”

Aha! I found her. Sneaky little devil. Her picture flashed on my screen. Josephine Jacobs. She was one of the people accused. One of my authors told me she was talking to people trying to sleuth around to clear her name. I put my computer in my backpack, hurriedly, and slug it on my back.

“Best of luck with clearing your name, Josephine.”  And got up from the table to make a bee-line for the door to go work at home. It wasn’t safe being out and about.

So you see, it wasn’t me. I didn’t spill the beans. I caught on to her game.

On the way out of the coffee shop, though, I saw my daughter Denise Barela talking to that reporter. As I walked by, I heard the words, “Murder. Saving the sideshow. Clues. How much money?” I don’t know what it all means but if I were you. I would look to her post. I raised her better than to talk to reporters but ever since she got involved with that mermaid business…..

Go HERE to out her story.

On your way out, be sure to check out the the board with more on A Giant Murder.

More about A Giant Murder…. 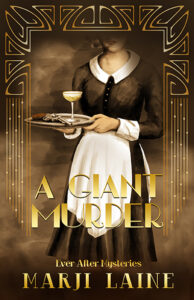 At a party full of suspects in the murder of Taggert, Josie served the food giant everything but an eternally “parting shot.” Who really killed TG Taggert?  His wife?  His son, Jack?  What about his Harper Davis?  Rumor has it, she was having an affair with him—motive for her or Taggert’s wife! The list of those who seemed to hate him keeps growing, including a chemist and a chef!

With her long-time friend, Office Porter O’Brien, Josie sets out to clear her name and find out who really killed “the giant,” and clear her name.