For the release of Tabitha Bouldin’s, Footprints on her Heart, we were asked to share about our funniest pet. For our family, it would have to be Szandor. 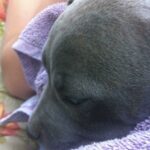 It was November 1st We let our dogs in out the morning and they were going crazy at our back fence. We had no idea what they were so upset about. There was a walking path behind out fence so my daughter, Kelsey, and I went to see what was back there. And there they were. Three little puppies. Someone one had dumped them right behind our fence. Kelsey and I gathered them up and took therm home. We were able to find homes for two of the three. The one left was the runt of the litter – he was cute but he was dopey. We all feel in love with him right away. 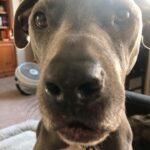 When I say dopey, I mean dopey. He would run into walls, he would like walls, he would run into the sliding glass door thinking it was open. And his walk. He had this gait where when he walked he would move a bit sideways. He was slow, lazy. Never in a hurry to get anywhere. He loved his people and being goofy with them too. If we didn’t pay him attention, he would be in our face making sure we saw him so he could get pets. It was all about him at times. To the left is a picture of him trying to get my attention. I was trying to work and there he was all up in my face trying to get me to pet him. 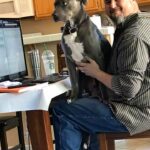 Szandor was daddy’s boy. He love Jim. He would wait for him to come home by laying on the couch in the front room. When Jim came downstairs, it was tradition for him to sit on the stairs so Szandor could like his head. Crazy dog. He also loved laying behind Jim when he would sit on the couch. Szandor looked like a like a fur scarf. One of Szandor’s favorite things was to sit on daddy’s lap. Somewhere in his mind, he was a lap dog. His favorite time to do it was when all of us where sitting around the table eating, talking, playing games. Even if Jim was just working, there Szandor would be with wanting to be on Jim’s lap.

To show you just how funny Szandor could be, let me share three short stories about him with you. Szandor was not one to steal food. In fact, this was the only time I can think of that it happened. It took place one Christmas Eve. All our family gathered at our home and our friends Don and Sherry came by to visit after church. Don got a tamale and set it at his spot at the table then went to go get a drink. When he came back, he asked what had happened to his tamale. Szandor, who is normally so slow and lazy, stealthily stole his tamale without a whole table of people seeing and ran off to eat it. We saw him eating just the last couple of bites when we found him.

Another time, we were all on vacation in Sequoia National Park, camping in our tent trailer. When not seeing the sites, we would sit and play games around the picnic table or read. We would have fires at night and all sit around the fire talking or singing 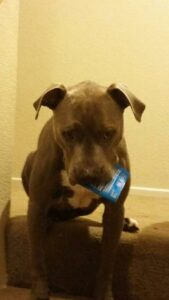 while Jim plays the guitar. Szandor was having none of it. He would sit at the door to the tent trailer wanting in. You see, he did not like the dirt. He was used to being inside. At night, he wanted to be in someone’s lap on a chair. In fact, he loved the chairs so much, my mother in law got him his own but he would rather be in someone’s lap. Not his on chair.

Finally, and this is probably my favorite. Szandor was always with the family so when we were all watching a movie one night and noticed him not in the den with us, we began looking for him. Where did we find him? At the top of the stairs. He had found the wrapper to Jim’s new socks and had snuck off to  chew on it. I put a picture of him to the right so you can see what he looked like when we found him. Just look at that guilty face.

We lost Szandor a little over four years ago due to a seizure condition. It was such a hard time for all of us. because we all loved him very much – Jim most of all.  We have a picture of him on the wall because he is never far from our hearts.

Thank you for letting me go back down memory lane to share Szandor with you!

More about Footprints on Her Heart 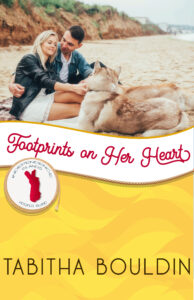 Before you go, don’t forget to enter my giveaway as well as all the authors in the Independence Islands Series.