Everyone has that “Grinch” event. For some it is Christmas, others is it retirement parties, for others birthdays, or for my good friend and partner in crime, Chautona Havig, it is baseball games. For me, it is weddings. Yes, yes, I know. I’m weird. What can I say?

Soooo when I was asked to write about my favorite part of a wedding…I didn’t know what to say. I go to weddings because I love the couple, want to support them, and am honored they thought of me. Surprisingly, sometimes I have a good time. Sure, some might say…Didn’t you enjoy your own wedding? I did. It was a 15-minute ceremony in Las Vegas. Then we visited with friends – now that is something I love to do. So if I have to pick a favorite part it is that I get to see people I haven’t seen and visit with friends while supporting the couple. THAT I can get behind.

If we move onto favors, I have one that was really special and I loved the thought behind it. The couple gave each family a sapling to plant to “watch their love grow”. Imagine that tree in 20 years? 50 years? It would be so special!

Anyways, reader friends, that is my story and I am sticking to it as they say.

Why are we sharing about weddings? It is for the release of the next book in our Independence Islands series, Matchmaker’s Best Friend by Kari Trumbo. Let me tell you some more about it! 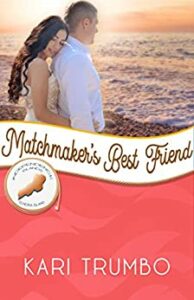 Before you go, be sure you enter my giveaway to celebrate Kari’s release plus visit each of the authors below to enter theirs. Enjoy!