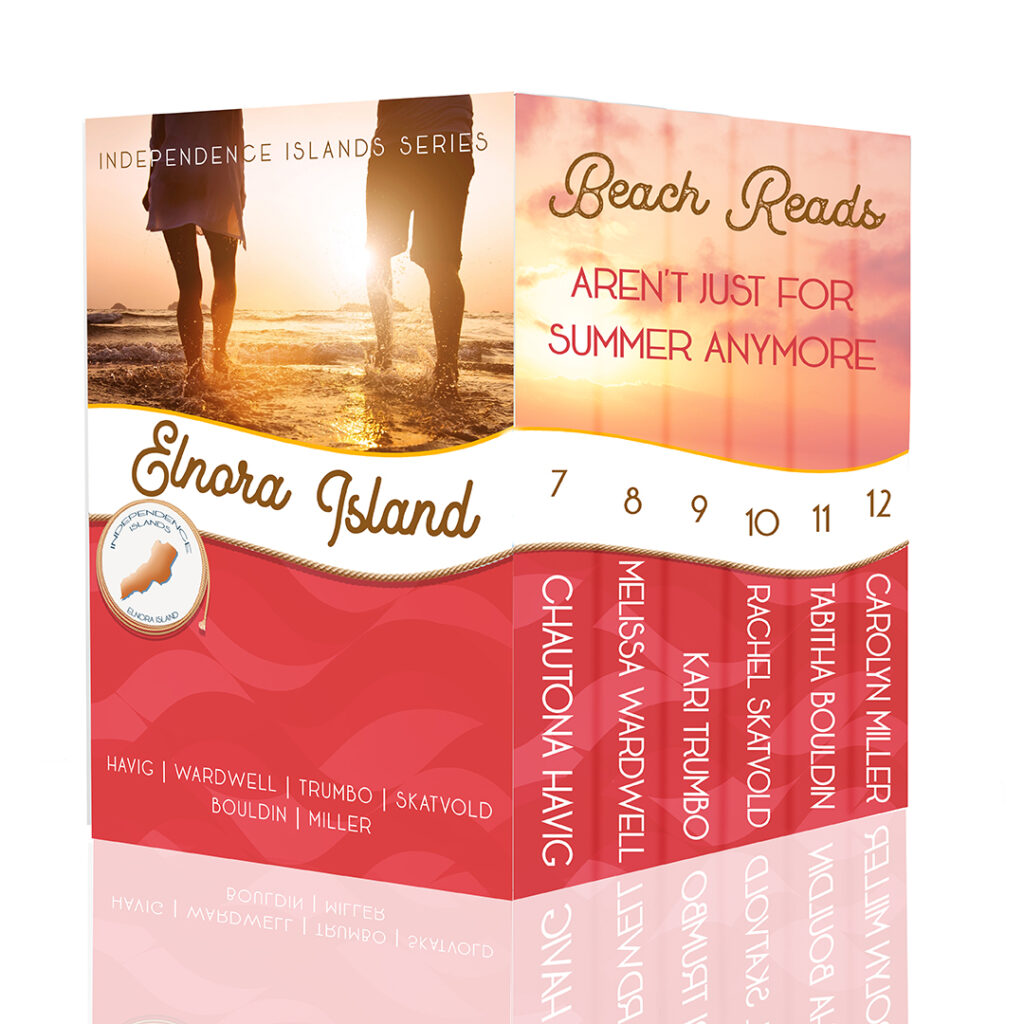 New businesses and friendships bring new joys… and trials. How are the new businesses on the islands succeeding in settling in and establishing themselves? Find out as you step off the ferry and onto Elnora Island.

Read all six books of the second island featured in the Independence Islands Series today!

Bookers on the Rocks by Chautona Havig— For twenty-five years, Tessa Booker has insisted that romance is something Hollywood cooked up to sell books and movies. So when Ross gets a gentle nudge from Mallory Barrows to look into what Tessa’s doing every day while he’s at work, he discovers a romance in the works–one that sounds a little too “ripped from the pages” of his life!

Heart Pressed by Melissa Wardwell— The Sweetheart Festival, an Elnora Island institution, has sparked more than a few romances over the years, but who would have thought it would light a fire in two hearts from two of the island’s oldest families. When Amara Martin and Dante Greco meet, sparks fly that may ignite more than romance.

Matchmaker’s Best Friend by Kari Trumbo— When they dated ten years ago as teens, it almost destroyed their friendship. So Pen Reese did the only logical thing.  She lied about how she felt—and still feels—about him. She’s still paying for that lie.

The Elnora Monet by Rachel Skatvold— Islanders call him the Elnora Monet. Is that island speak for “pompous, arrogant jerk?” When Carly Mulligan volunteered to make house calls on Elnora, she never imagined treating the richest cat on the islands. What other feline has his own wing in a mansion like the Belshaw Estate?

Stealing the First Mate by Tabitha Bouldin— Single and happy is not an oxymoron. Right? Nigel Jones has loved Darcy for ages, but her father (his boss, of course) ordered him to keep his feelings to himself, thanks to a stupid mistake that Darcy (thankfully) doesn’t know about. Too bad her dad does.

Regaining Mercy by Carolyn Miller— A mom ready to do anything for her son. A man determined to win the woman he loves. Going on Love at First Glance had seemed like such a good idea. She didn’t care about finding Mr. Right. No, Mindy Murray chose the reality TV show for more mercenary reasons. A mom’s gotta do what a mom’s gotta do when it comes to feeding her son.

Now you can read all the “Elnora books” in one convenient set of the Independence Islands Series featuring five islands, six authors, and a boatload of happily-ever-afters.