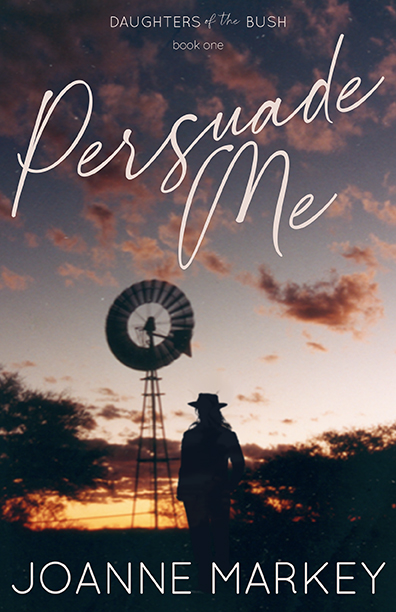 Part of the Daughters of the Bush series:

For seven long years, Anne Elliot of Kellynch Station quietly mourned the loss of her first love. Now that she’s finally over Fred for good, her sister offers the perfect escape: Uppercross.

This move, from one cattle station to another, offers new friends, new responsibilities, and now that she’s out from under her father’s domineering thumb, a whole new world of possibilities.

The sky is the limit.

Or maybe the sky is the perfect place for helicopter mustering pilot Fred Wentworth to spend his days. It took a while for him to regroup after their breakup, but now he’s back, he’s successful, and he’s put the past so far behind him he doesn’t even think about Anne more than a couple dozen times a day.

Or it was until he quite literally runs into the one person he hoped to never see again. After that, what’s a bloke to do other than rethink every lie he’d convinced himself was the truth?

Although they both seem willing to admit they were wrong all those years ago, when things take a bad turn, Anne is left to wonder… Is it too late for a reconciliation?

This is a great book! It’s engaging, funny, and also thought provoking. I love how the author was able to layer several stories together in a way that maintains the overall flow but also gives enough time to each one. I especially enjoyed seeing Anne’s character and faith develop through the story. The various family dynamics and situations that came up were interesting, and I’m looking forward to seeing how those progress in future books. I definitely recommend this!