Skip to content
Celebrate Lit Publishing > The Ever After Mysteries 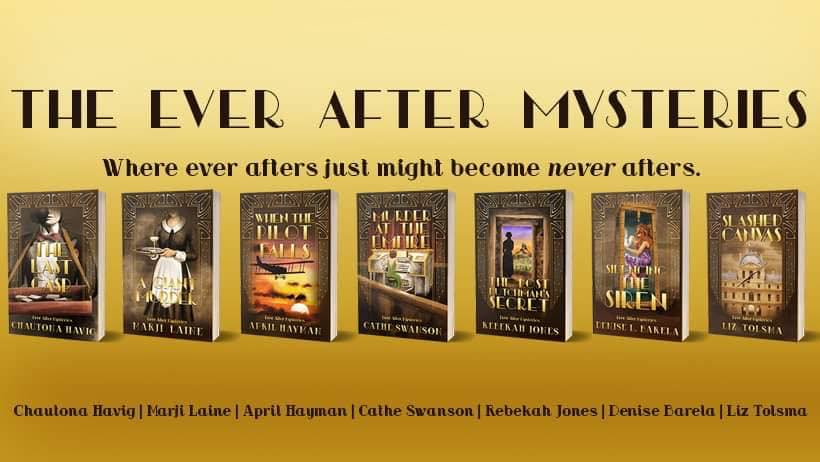 Everyone loves a fairy tale. Timeless stories, ordinary people,
extraordinary events. But what happens if those events lead to a
not-so-happily ever after?

Seven fairy tales retold in unusual ways. They all occur during the
“Roaring 20s” and include mysteries. We call them, “The Ever After
Mysteries.”

Click on the title of the book to learn more about the book, the pre-order gift, and to pre-order the books! 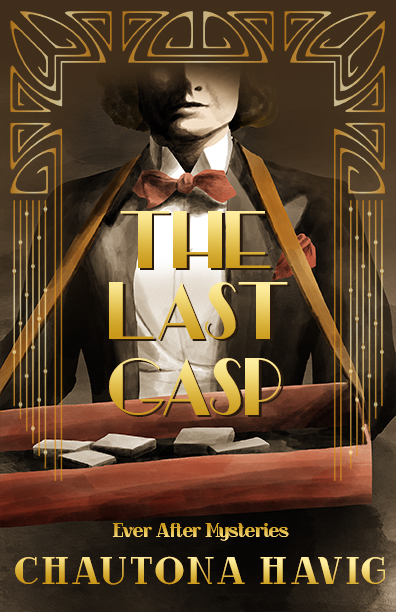 The Last
Gasp by Chautona Havig

A cigarillo girl at one of the finest theaters in town, Lucinda Ashton
has dreams that don’t include the movie industry.

At the pinnacle of his Hollywood career, Garrison Prince’s reign ends
tonight.

So, when gunshots ring out just as intermission begins one night,
Lucinda finds herself smack-dab in the middle of a brouhaha that leaves
three dead, and no one has a clue why.

The Last Gasp blends “Cinderella” with murder and enough crime
and story clues to keep you on the edge of your seat. 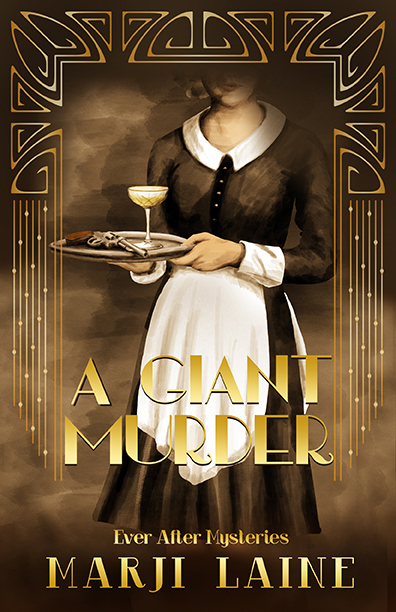 A Giant
Murder by Marji Laine

Would you like a shot of… death
with that, sir?

Josephine Jacobs was just doing her job, serving at an exclusive party,
so why is she now being accused of shooting TG Taggert?

With her long-time friend, Office Porter O’Brien, Josie sets out to
clear her name and find out who really killed “the giant,” and clear her
name.

A Giant Murder offers a retelling of “Jack and the Beanstalk”
with enough clues and suspects to keep you looking over your shoulder.
We’d recommend Kevlar… but it hasn’t been invented yet! 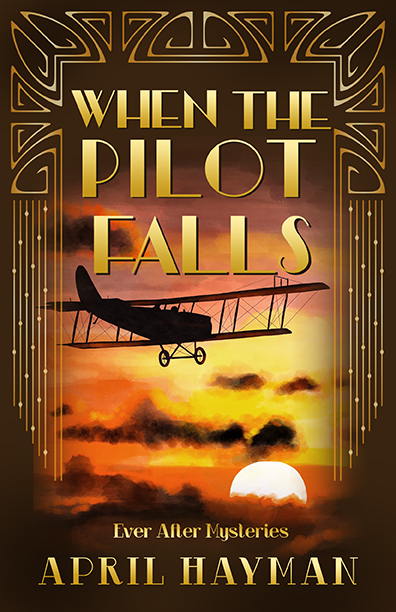 When the Pilot
Falls by April Hayman

In 1923, there aren’t many pilots, but Willie Labeau didn’t
let that stop… her.

She has a second chance at a fabulous job doing what she loves. There’s
just one caveat. No questions about her new boss’ past. From anyone. Ever.

Hugh Taylor has secrets that he’s not willing to share with anyone, but
can he trust Willie to keep her word and leave his past where it
belongs? In the past?

When the Pilot Falls offers a retelling of “East of the Sun,
West of the Moon” that will keep you gripped to the edge of your seat as
you watch hearts soar and daring dos. 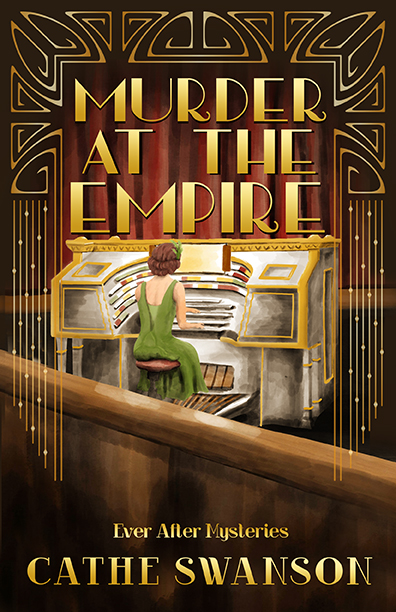 Murder at the Empire by Cathe Swanson

Some girls want fast lives in speakeasies, dripping with
ropes of pearls.

Gayle Wells just wants a car—oh, and to be a movie palace organist in
Chicago.

As the newest organist at the Empire Theater in Chicago, she’s
surrounded by fabulous art and well on her way to earning that car.

Are a few pieces of art really enough motive for the string of murders?

Murder at the Empire offers a retelling of “The Nightingale”
that blends with murder with enough crime and story clues to keep you on
the edge of your seat. 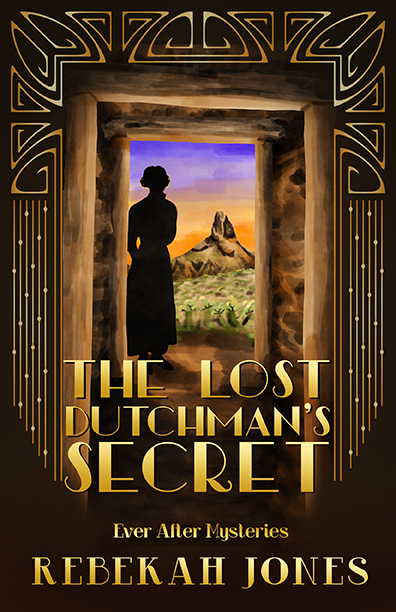 The Lost Dutchman’s Mine by Rebekah Jones

There’s a deadly secret in them thar hills—and gold, or so
they say.

When her father says he needs money to pay off a local man, Dorothy
Hodges doesn’t know what she’s supposed to do. After all, it’s not like
she can spin gold out of thin air.

In this twist on Rumplestilskin and the legend of the Lost Dutchman Mine
in the Superstition Mountains of Arizona, Rebekah Jones blends mystery,
intrigue, and… murder?

Find out in The Lost Dutchman’s Secret. 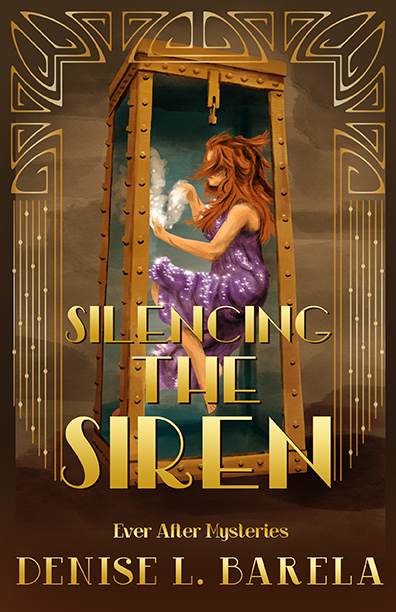 Andrew Grayson thought he had everything… until he
met her.

She’s just a Coney Island freak show exhibit–or is there more to
Annabelle Thompson than the sweet girl in a wheelchair?

He loves her, but she’s gone, and Andrew doesn’t know if he is ready to
believe she’s really dead.

Silencing the Siren offers a retelling of “The Little Mermaid”
that will keep you gripped to the edge of your seat as you watch the
story unfold. 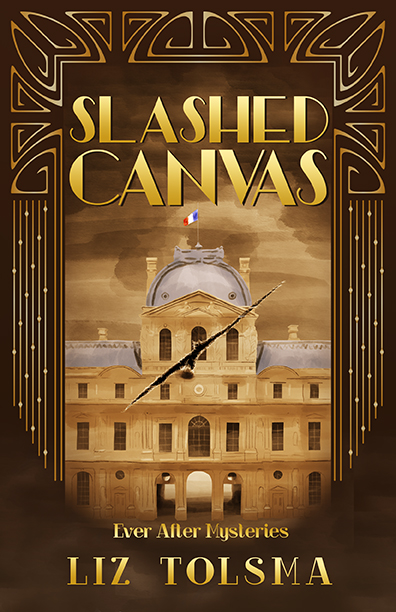 Held prisoner by all she’s lost, Katarina’s about to lose
all she has.

After Grand Duchess Katarina Volstova finds her daughters and their
nanny missing, the loss overshadows the grief she’s been living in since
her escape from the Russian revolution. A painting at the Louvre may
just hold the key to finding the kidnapper before she never sees her
girls again.

Slashed Canvas offers a retelling of The Lost Princess
that mingles self-centered grief, spoiled little girls, and proof that
nothing will stop a mother from saving her children.

The Ever After Mysteries begin releasing in July 2021

Preorder your copies today for the best price and stay tuned for
information on all the bonus perks that come with preordering! We’re
sure you’ll love all of these happily – not – so – ever- after mysteries!