Have you heard the news? April’s hero is missing and we need to get him back on the page!

I was walking down to the lake the other day near our house, just as a do most days to get the blood flowing. The sky was clear and the sun was on my face – A nice change to the inside of my house where the hubs keeps it a bit chilly. The path wasn’t at all crowded which surprised me because many a day I have to dodge kids on bikes and electric scooters. A bit excited that I could walk the path uninterrupted, I picked up my pace and headed to find the baby ducks.

Who can resist little ducklings?

As I turned to cross the first bridge, I felt a bit of a tingle. You know…That tingle you get when it feels like someone is watching you.

I have been watching to many Dateline episodes!

I shook my head and kept walking. 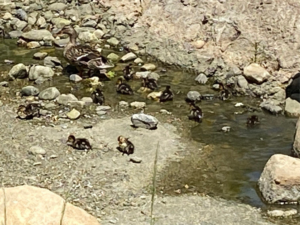 The baby chicks were just swimming just up ahead. I moved close to snap a picture for the girls.

I turned to where the voice was calling from to see a shoulder peeking out from behind a tree.

“I have been waiting to see if I could reach you.”

Who is this person? I pulled out my cell phone to…

“I have a message for April – April Hayman.”

April. I knew immediately who it was.

“Hugh! April has been searching everywhere for you! She needs you to get back into the book!” I moved toward the tree so I could hear him better.

“Stay there. Don’t come any closer!”

“What is going on? Look. April just lives a few hours from here. We can drive you there now. It would be no problem.”

“No, no. There is something going on. I am trying to solve it. To save…Someone’s coming!”

I turned at a noise behind me to see a teen on his skateboard. I recognize him as one of my neighbors kids.

“Hugh. I know him. He is a neighborhood kid.”

He was gone! Where in the world did he go and how to he go so quickly? What did he mean he was solving something and who does he need to save?

It is all so strange. I had to contact April to let her know and I had to see if Liz has seen or heard anything – She did, but she won’t share until September 10!.

More About When the Pilot Falls… 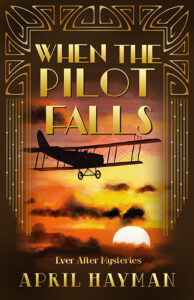 Get your copy HERE

Be sure to stop by each of the authors sites to see what happened there and enter their giveaway!