So you want to know the story. I understand why. It was both an unusual and interesting day. I have my coffee…Do you need to order something before I begin? No. Okay. So here it goes.

I got up and got ready for high school just like I did each and every day. It was my turn to ride in the front seat so I climbed in and let our dog, Lady, on my lap. My mom, my sister, and I chatted all the way to school. I waved them goodbye as I headed toward the front steps. I put a picture so you can see what I am talking about. I had done this hundreds of times before. 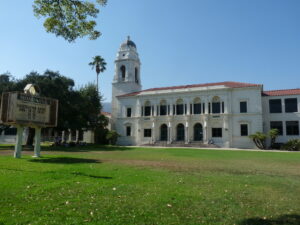 That’s when I saw her.

She was dressed very oddly. A dress with sequins. A head band that I don’t even know how to describe. Make up. Well, she was crying. Not just a tear rolling down her face…Niagara falls kind of crying. Her make-up was all over her face..

I sat down next to her. “Why don’t you start at the beginning.”

She hiccuped. “I was trying to make the train. These shoes. I jumped.I landed here.”

“I think you need to take a chill pill and start over.”

“Whoa. Slow down. It’s a saying. You know…Take a chill pill. Calm down. No need to flip out.”

“Just start from the beginning.”

“I had to make the train to meet the troupe. I was running very late.” Absently she reached down and rubbed her toes. I hadn’t even realized she was barefoot. “My shoes pinched my feet horribly. I must have them stretched when I get the funds.”

I raised an eyebrow.

“Oh, yes. I was trying to run to catch the train. I got to the platform as they were doing the last call to board. I ran and ran and the doors began to close. That is when I jumped. I thought I made it safely but….”

The tears started to come again and I thought I better do something quick. “What happened?”

“I was standing on these steps! I was surrounding by children dressed…Well, in bright colors I have never seen before. Half shaved heads. Girls, mind you! They were having a bull session talking some bunk about eating someones shorts. I walked into the building to overhear another bull session talking about gagging someone with a spoon. Then there was this loud, awful noise. It was coming from a gray box on someone’s shoulder and another person laying on the floor trying to move forward without using his arms. I like corn now and again but I swear I haven’t had any today!”

“Bourbon. It is my favorite drink.”

I leaned in to see if I could smell anything. She didn’t smell like alcohol.

“I need to meet the troupe. Cathe is going to be looking for us.”

“Just where is the troupe meeting and just what year are you dressed to be from? This must be one bodacious party!”

“Bodacious?” She shook her head. Something changed on her face. “Just where am I? I feel like I have been written into a Ray Bradbury novel.”

The next question she asked is the same question I ask you to see if you are as smart as everyone says. What decade is it?

Oh you want to know how she got back home? That is a story for another day. I would check out Rebekah Jones’ post to see if she knows anymore about what is going on…

Before you go, please let me tell you more about Murder at the Empire. I think you will like it….

Gayle Wells is a killer organist, but does a killer have her in his sights?

They call him the Emperor.  John Starek fills his theater with fine artwork and treasures. He’s particularly pleased to have one of the country’s first female organists – and he thinks Gayle Wells is the bee’s knees.

Despite pressure from her social crusader mother, Gayle isn’t interested in changing the world. She just wants a car of her own – and a career playing the organ at the Empire movie palace would be especially ducky.

Then the Empire’s treasures start disappearing and employees start dying. Are a few pieces of art really enough motive for the string of murders? Will Gayle be next?

Murder at the Empire brings the Nightingale into an elegant movie palace in the roaring 20’s – but the real excitement is all off-screen.